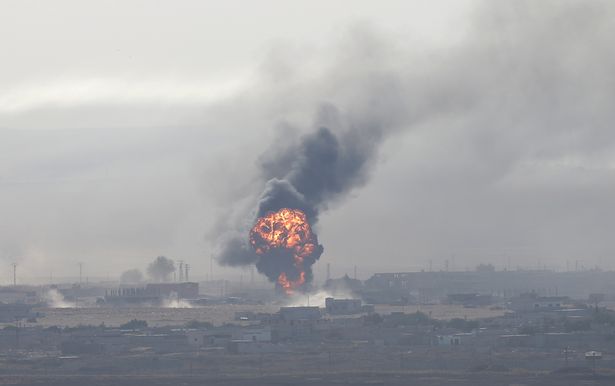 It is said in the media concept, (the picture represents a thousand words), but in the city of Serê Kaniyê only there are pictures and scenes that represents not only words but also thousands of pains and disasters.

The Kurdish fighter is a symbol of resistance

The brave fighter who repels the bullets of the enemy in his chest is the one who wrote the anthem of freedom with his blood on the walls of Serê Kaniyê. That brave fighter has not broken, he is still between the streets and trenches of the city, will one day come out and again chant the hymn of freedom.

When the battles intensified along Rojava from Serê Kaniyê to Dêrik, I was in Qamishlo, I was a martyr of a Kurdish woman, I was taking pictures of her, she was fifty years old wearing a white Kurdish shawl on her head and her eyes shining from the fullness of life.

“Our young men and women in the trenches of fighting, nothing can stand against us, we will not remain silent any longer, we will defend ourselves, resistance is life.”

The shoes of the martyr Hevrîn

Many tragic stories come to hear with the beginning of wars. Death is the fuel of wars. In Serê Kaniyê, the blood of the martyrs was the fuel of war, the blood of our young men and girls who were the age of roses. Throughout the history of mankind, there are foundations and principles for wars and conflicting groups. As for our Turkish enemy and Islamic terrorist factions, their foundations are brutal and barbaric killing, and boasting about what their hands commit by recording their killings on video clips so that their threatening messages reach us, so when the death of Hevrîn was published while terrorists were boasting about what they did. The martyr was buried under the soil of this golden land, and her black shoes remained with her mother, when the Turkish army wanted to enter Rojava in the form of joint patrols with the Russian army, the people of Rojava also sent letters, the letters were not in content roses and no bullets, but shoes and stones.

People along the border waited for Turkish-Russian patrols, while Hevrîn’s mother had the shoes of her daughter in her hand, and her eyes full of revenge.

Thanks to the eyes of journalists and the lenses of cameras, we could document all the moments of war: victory, struggle, resistance, fall, and also the calamities of people.

In Serê Kaniyê, the sparks of refraction were shining in the eyes of our old men and women, those who spent their years in good and bad times in that city, and left all their hopes and dreams behind them.

Many of them wanted to stay and die on the soil of their city, but for many reasons they had to be displaced. When we met one of them in the city of Qamişlo, we could not dare ask them about the situation of the city, we were ashamed of the looks of their eyes.

Once I asked an old lady about their condition, when she answered, she could not look into my eyes, then she knew how painful it was to feel like leaving our homes without returning.

On the new year 2020, many initiatives were launched by journalists and civil society institutions in order to visit the IDPs to bring joy into their hearts and offer their children some gifts, toys and sweets.

Would I be able one day to tell that old lady, “Get up, mom, we’ll go back to Serê Kaniyê.”

On Saturday, May 28, 2022, the activities of the Literary Week, which is organized by the Diwan of Literature in

Articles and studies IN THE PRESS Photos Press reports and investigations

A picture from the book signing ceremony (The Sniper)